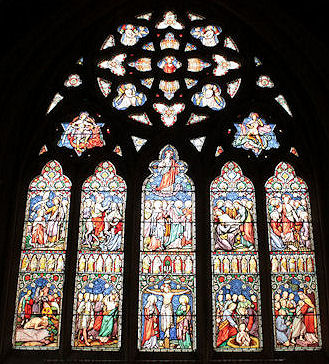 In the five panels across the middle of the window, the following scenes from our Lord's life are depicted (left to right):  (a) the baptism of Jesus in the Jordan, (b) the triumphal entry of Jesus into Jerusalem, (c) the Ascension of Our Lord, (d) the burial of Jesus and (e) the risen Jesus meeting his disciples again.

Under these scenes are shown the twelve prophets of the Old Testament and the twelve apostles of the New Testament.

The five panels across the bottom of the window depict (left to right):  (a) Naaman washing in the Jordan, (b) the triumph of David after the slaughter of Goliath, (c) our Lord's crucifixion, (d) the lowering of Joseph into the pit and (e) Joseph meeting his brothers again.  The Old Testament references in the lower panels are linked to the corresponding upper panels.  The window was produced by Wailes of Newcastle and, like the other windows in the Chancel, was given in memory of the Revd Martin Routh by members of his family. 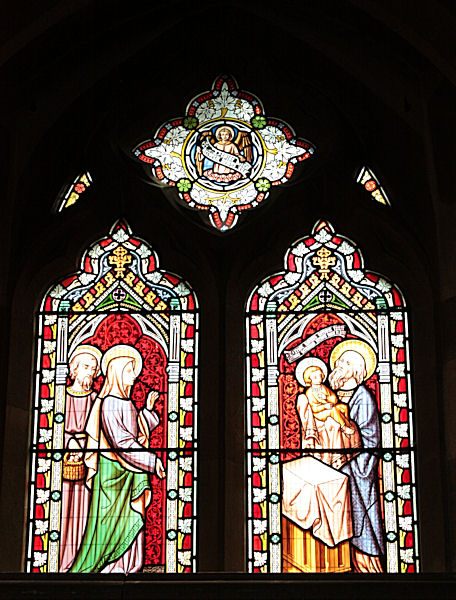 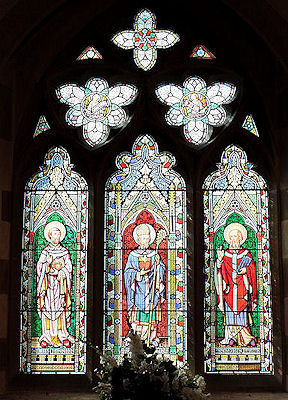 High up on the right of
the chancel is a window depicting the Song of
Simeon and the Presentation
in the Temple.

Behind the choir stalls is a window with figures of St Gregory, St Augustine and St Chrysostom - all doctors of the early church. 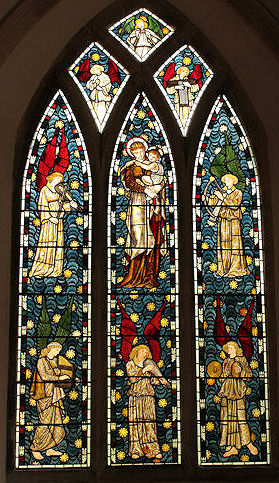 The East Window of the Lady Chapel shows Mary and the baby Jesus surrounded by a group of angels playing mediaeval instruments.  This window was designed by William Morris, the distinguished artist and craftsman of the Pre-Raphaelite School, and one-time pupil of G.E.Street.  The window is described by an Arts & Craft website as "1869 window, Burne-Jones Virgin and Child designed for the window and five minstrel angels by Morris".

The window was a gift of the husband of Mary Bradney who died in childbirth a year after their wedding.

The inscription on the plaque beneath the window states: "To the Glory of God and in memory of Mary Frances, wife of John Bradney Esq. Died Nov 2nd 1867 Aged 24."

The parents of John Bradney have a window in the North wall commemorating their lives. 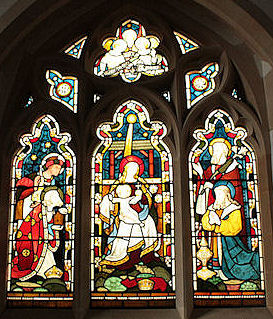 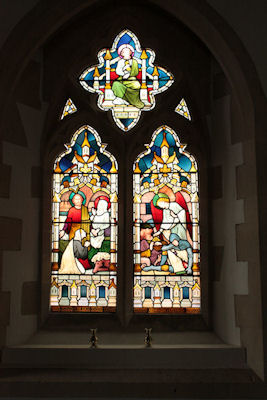 The windows in the North Aisle were given in memory of the lives of members of the Bradney family and the Webb family. 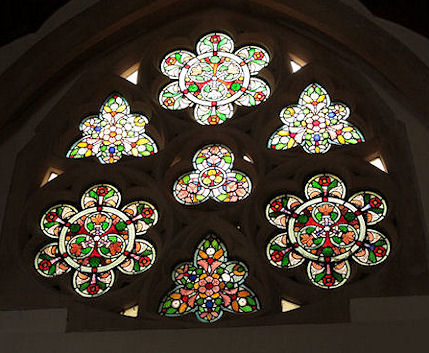 High up at the end of the North Aisle is a set of round windows.