History of the Church Building

There has been a Christian church, dedicated to St Michael, on this site in Tilehurst since 1189, about 70 years after Reading Abbey was founded.  The church was served by the monks of Reading Abbey until the Dissolution.  The first church building here was probably made of wood and no trace remains of it.  Several other buildings may have followed.  The parish was originally in the Diocese of Lincoln; it later transferred to the Diocese of Salisbury until 1542, when it was finally transferred to the Diocese of Oxford. 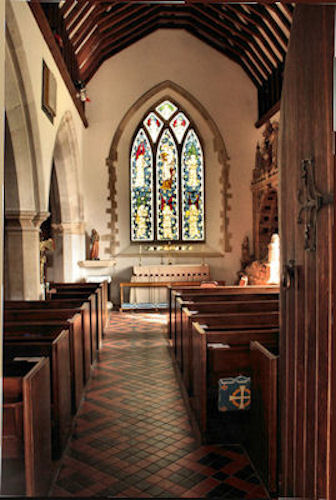 The oldest part of the present church is the south aisle, now called the Lady Chapel, which was built in the 13th century.  Signs of local chalk can be seen in the arches (arcading).

Beside the lady chapel altar is one of the oldest brasses in Berkshire. The brass memorial is to Gauwain (William) More and Isabella his wife, both of whom died in 1469, during the Wars of the Roses.

William More was a Marshall of the King's Court, probably that of Henry VI.  One of his duties may have been to organise Masques and Dances to entertain the court. 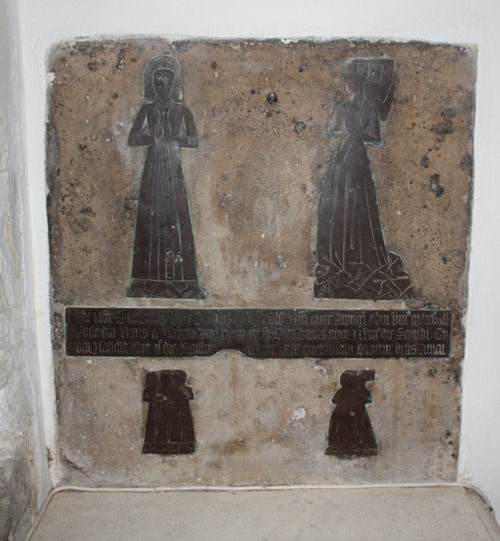 He is shown as a full length figure in civilian dress, standing on a small grass covered mound.  He has long hair and wears a close fitting gown, with a plain girdle around the waist.  His wife is wearing a butterfly headdress and a close fitting gown, low at the neck, with very tight sleeves, which end in large cuffs, half covering the hands.

Below are the effigies of three sons standing behind each other, and each wearing long gowns, also two daughters, both wearing the peculiar butterfly headdress.

The inscription on the brass and its translation read as follows:

"Here lies noble Gawain More, son of Richard More Esquire, once one of the Marshals at the court of the lord King, and also Isabella his wife, which same Gawain died the 28th day of September and Isabella died the 2nd day of November, in the year of our Lord 1469, on whose souls may God have mercy. Amen." 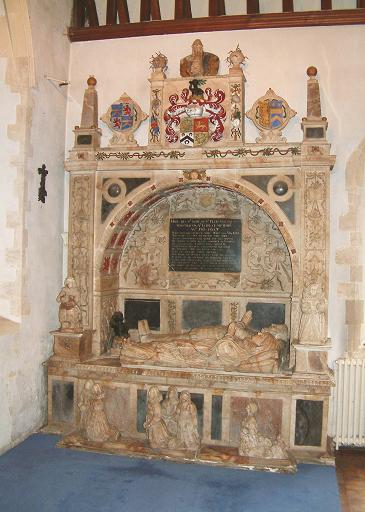 In the Lady Chapel, the elaborate tomb is that of Sir Peter Vanlore and his wife Jacoba Thibault.  He was a Dutch merchant and banker, born in Utrecht in 1547 and naturalised in 1607.  He bought the manor of Tilehurst from Thomas Crompton in 1604 and also owned Wallingford Castle.  He lived in a mansion which he built in Calcot, probably on the site of Calcot House in the present golf course.  The tomb is thought to be the work of William Wright of Charing Cross.  At floor level, the tomb portrays their nine children.  Those who died in infancy carry skulls in their hands, as was the custom.  Resurrection is symbolised by fruit, flowers and leaves, and dissolution by spades, picks, scythes and torches.  Prayer and time are depicted by flaming censers and hour glasses.  The epitaph reads:

"HERE LIES YE BODY OF SR. PETER VANLORE KN.
WHO DIED ON YE 6 DAY OF SEPTEMBR
ANO: DNI: 1627
WHEN THOV HAST READ THE NAME .  HEERE LIES VAN LORE
THOU NEEDES NO STORY TO ENFORME THEE MORE .
A LONG INDVSTRIOVS WELL-SPENT LIFE HAS SHOWNE
HIS WORTH AS FARRE AS OVR COMMERCE IS KNOWNE .
HIS CONVERSATION LONDON LONG APPROV'D
THREE ENGLISH MONARCHS HAVE EMPLY'D AND LOV'D
HIS INDVSTRY .  HIS PROVIDENCE AND CARE
LETT HIS ENRICHED FAMILY DECLARE .
THE POORE HIS BOVNTY SPEAKE .  THAT HEE WAS NOT
A SLAVE AT ALL TO WHAT HIS WISEDOME GOTT .
AFTER FVLL FOVRESCORE YEARES TO HIM HERE  LENT
THE GREATEST PART IN ONE CHAST WEDLOCK SPENT
HIS SOVLE TO HEAVEN .  HIS EARTH TO EARTH IS COME
VTRECHT HIS CRADLE .  TILEHVRST LOVES HIIS TOMBE .

Only two of their children were alive at the time of his death.  One of their sonsTheir grand-daughter, Jacoba, and her husband, Henry Zinzan, were also buried at St Michael's Church in 1677 and 1676 respectively.

There are many interesting memorials on the walls; some dating from the early Victorian period are high up.

The east window of the lady chapel is an early design by William Morris, artist, designer and social reformer.  The centenary of his death was marked in 1996, both locally and nationally.  The window shows Mary and the baby Jesus surrounded by angels playing medieval instruments.  The window is described by an Arts & Craft website as "1869 window, Burne-Jones Virgin and Child designed for the window and five minstrel angels by Morris". 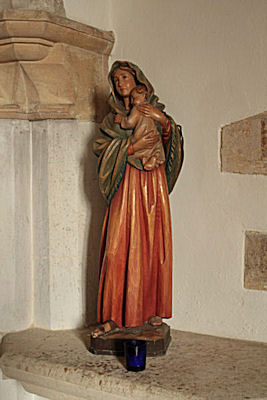 Click here to view pictures and details of all the stained glass windows.

The statue of the Madonna and Child was added to the lady chapel in memory of John Sefton Tilston, Rector, who died in office in 1984. 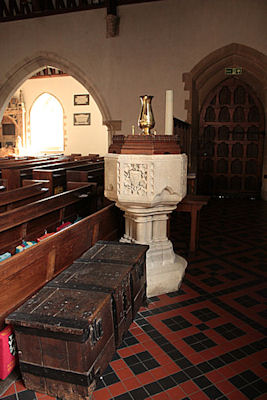 The main body of the church, the nave, stands today as it was restored in 1855 and altered in 1955.  By the mid 19th century, the church had fallen into disrepair.  G. E. Street, the renowned architect and champion of the gothic style, was engaged for major restoration work and the addition of the north aisle.  The cost, amounting to £3,000, was borne by the Routh family.  (Martin Joseph Routh and his nephew, John William Routh, were Rectors of Tilehurst in 1810-1855 and 1855-1905 respectively.)  Street was associated with several Pre-Raphaelites; he was a close friend of Ford Maddox-Brown and the Rosettis, and William Morris was his pupil for a time.

The font (for holy water for baptism), the cupboard under the bell tower, and the pulpit (replacing one with three tiers) are all Street's design.  Street's pews replaced the old box pews, but they were themselves replaced in 1966. 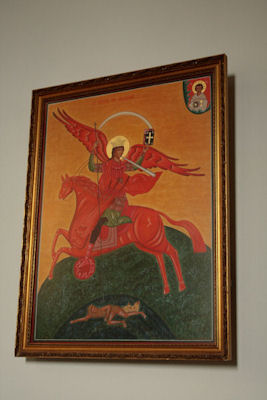 At the head of the North aisle is an ikon painting of St Michael defeating the devil.  This was commissioned in 1989 to mark the 800th anniversary of the church.

The windows on the north aisle are assumed to be designs by Clayton & Bell, much used by Victorian gothic revival architects, including Street.  The window near the icon shows St Peter, at the top with keys, to the left raising Tabitha from the dead, and to the right being freed from prison chains by an angel.  The window towards the back of church shows the visit of the three wise men to the infant Jesus.

Click here to view pictures of all the stained glass windows.

The 17th century parish chest, originally used to store church documents, has a coin slot for alms for the poor of the parish.  It is thought to have originally been a dowry chest.

Recent maintenance and minor alterations have taken place, including the addition of doors to the south porch in 1962, and retiling the floor to the original Victorian design in 1975.

The tower was built in 1731.  The spire was added to the tower in 1855, when the rest of the church was re-built to G. E. Street's design.  There are currently eight bells.  Originally there were six, cast in 1723 by Henry Bagley III at the foundry of Joseph Carter (the last of the famous Wokingham bell founders).  Two trebles by Mears & Stainbank were added in 1885, and individual bells were recast in 1970 and 1978.  They were rung from the ground floor until 1906 when an extra ringing floor and screen were erected.

The Sanctuary and Chancel 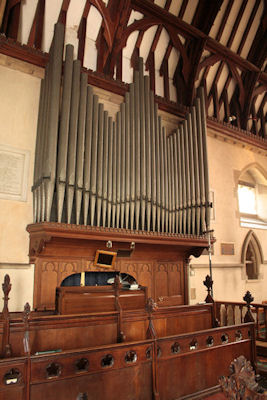 In the Sanctuary and Chancel, the choir stalls by Street are decorated with different leaf designs.  The current electronic organ was installed c.1998.  The previous organ was built in 1905 by Norman & Beard as a memorial to the Rev. J.W. Routh; it was powered originally by an hydraulic pump which was fed, it is thought, from a pond in the Rectory garden.  Prior to 1955 the organ console had been located on the south side of the chancel.  In 1836, the church had owned a barrel organ which could play thirty different tunes.

There is a large east window above the high altar, and two other stained glass windows in the Chancel area.

Click here to view pictures and details of all the stained glass windows. 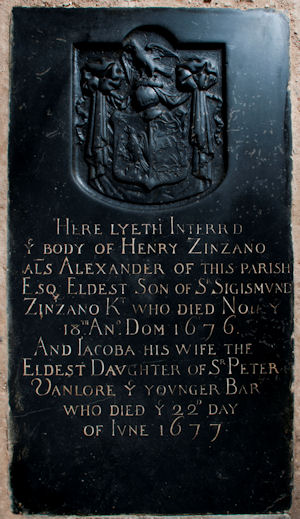 When the church restoration took place in 2012-13, a ledger stone of historical significance was uncovered beneath the chancel floor.  This stone was to mark the burial of Henry Zinzan and his wife Jacoba (eldest daughter of Sir Peter Vanlore the Younger, and grand-daughter of 'Old' Sir Peter and Jacoba Vanlore).  Henry died in 1676, and Jacoba in 1677. 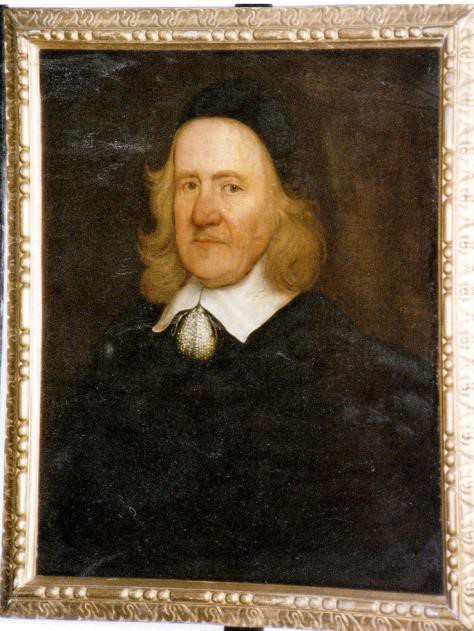 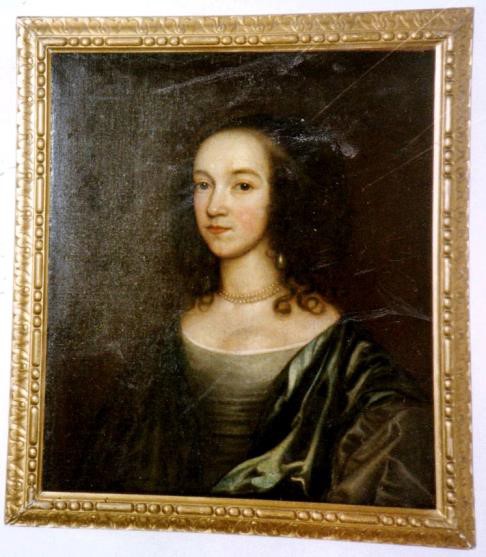