History of the parish

The term ancient parish is normally used to describe a parish which can be identified in the early middle ages.  Ecclesiastical Parishes originated as the basic unit of ecclesiastical administration, the area served by a parson to whom dues were paid by the inhabitants.

As manorial courts gradually fell into decay and various legislation was passed, ecclesiastical parishes gradually became units of secular administration as well, particularly in the sixteenth and seventeenth centuries.  Parish vestries, theoretically composed of all parish ratepayers, were authorised to levy rates for poor relief and the maintenance of highways as well as church maintenance, and they also appointed the parochial officers, the beadle, church-wardens and overseers of the poor, to conduct the parish business.

Until the eighteenth and nineteenth centuries, ancient parishes carried on both ecclesiastical and civil functions.  These were gradually split until in 1894 Parish Councils were created to undertake all the most local forms of civil government. 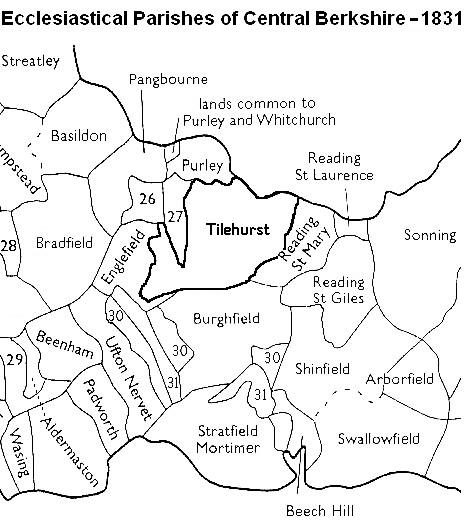 The parish of Tilehurst has, in common with other parishes in areas of rapid development, a history of churches/chapels being built within its boundaries which go on to become separate parishes. 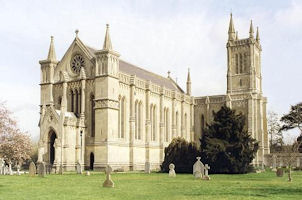 The church of Holy Trinity, Theale was built in 1832 by Mrs Sophia Sheppard, supported by her brother Dr Martin Routh (Rector of Tilehurst at that time), and was consecrated by the Bishop of Salisbury.  It replaced a brick chapel-of-ease built in 1799 by her late husband, Dr Sheppard, who died in 1814.  As Rector of Tilehurst, Dr Routh was in charge of the church from 1832 to 1854.  The ecclesiastical parish was separated from Tilehurst in 1855, and the civil parish of Theale was formed in 1894.

The church of St George, Tylehurst was built in 1886 and consecrated by the Bishop of Oxford.  It replaced a temporary iron church, with a seating capacity of one thousand, which had been erected in 1880 to meet the needs of the expanding population, including the troops at Reading Barracks.  The civil governance of the new parish transferred into Reading in 1889.  St George's church was not technically a daughter church of St Michael's, but was built on land given by the Rector of Tilehurst. 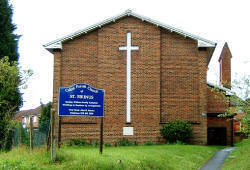 The church of St Birinus, Calcot was built off Langley Hill in 1950 as a daughter church of St Michael's.  It became a parish in its own right in 1980.  The church had celebrated 50 years of worship around the time of the millennium but, in October 2007, it ceased to be a separate parish.  The church has now been combined with St Catherine of Siena, and the area it served has been split between St Catherine's, St Michael's and St Matthew's, Southcote. 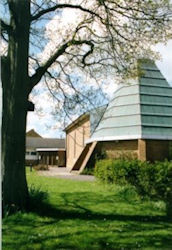 The church of St Catherine of Siena, Tilehurst was built in Wittenham Avenue in 1964 as a daughter church of St Michael's.  It had previously started life as a Mission Hall in Little Heath Road.  It achieved separate Parish status in 1976.

In 1984 St Catherine's gave rise to a daughter church of its own - the Cornwell Community Church.

Further information about the parish of Tilehurst is available from the British History website.

The following summary of Tilehurst is taken from Kelly's Directory of 1877.

TILEHURST is a village and parish 39 miles by rail and 42 by road from London and 3 west from Reading, in the hundred of Reading, union of Bradfield, county court district of Reading, rural deanery of Bradfield, archdeaconry of Berks and diocese of Oxford.  The river Kennet passes on the south.  The church of St. Michael, in the Decorated Gothic style, is a handsome stone building consisting of chancel, nave, aisles, porch and tower with spire containing 6 bells; it also has an alabaster reredos and carved oak stalls and stained windows; it was almost entirely rebuilt in the year 1856; the north [sic] aisle and the base of the tower, on which rests an elegant spire, are the only remains of the old building.  The register dates from the year 1559.  The living is a rectory and vicarage, yearly value £1,000, in the gift of Magdalen College, Oxford and held by the Rev. John William Routh, M.A. of that college.  There is a National school, built by the late Mrs. Sheppard, of Amport, Hants; £80 yearly is paid by Magdalen College, Oxford; an Infant school has been added.  There is an Independent chapel.  There are some almshouses, endowed in 1851 by the late Mrs. Mary Lyne, of Burghfield, for six poor widows, or single women, who shall have been born in the parishes and attained the age of sixty, three from each of the parishes of Burghfield and Tilehurst.  The poor's land of 30 acres produces £29 yearly.  Fronting the Bath road stands Calcot House, the property of John Henry Blagrave, esq. D.L. ; the surrounding park is well stocked with deer.  Prospect House, one mile from Reading, the property of Capt. Liebenrood and residence of William Banbury, esq. is a large brick building standing in a fine undulating park of 120 acres, and commanding extensive views of the surrounding country.  John Henry Blagrave, esq. who is lord of the manor, and Captain Liebenrood are the principal landowners.  The soil is light; subsoil gravel.  The crops are various.  The area is 4,164 acres; rateable value £20,421; the population in 1871 was 1,556.

CALCOT is a hamlet about two miles west from Reading.

THEALE was separated ecclesiastically from Tilehurst in 1855.