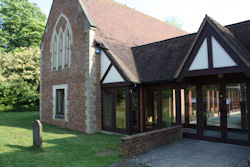 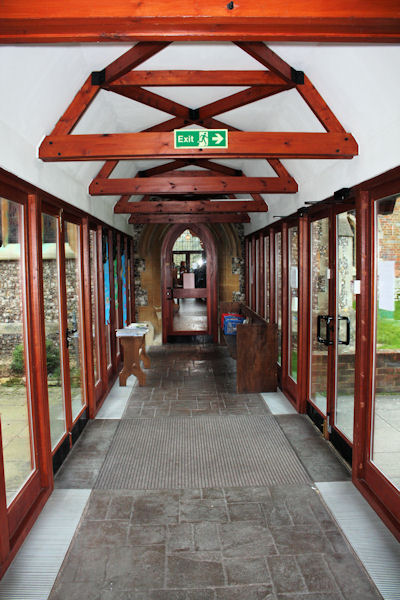 The extension at the side of the church was completed in 1993.  It comprises a cloister with enclosed garden, a small meeting room, the Parish Office, a large meeting room (the Morlais Room) with a kitchen.  It also provides a sacristy, a choir room, toilets and a utility room.  It was paid for entirely by parishioners through donations and fund-raising events.

Along the walls of the cloister, in addition to the Stations of the Cross, are pictures of former Rectors and some pictures showing views, inside and outside, of the old church prior to alterations.

The restoration of the main church building was undertaken in three phases.

Click here to go to the pictorial record of Phase 3 (in History > Gallery).

A summary of the Phase 3 work is given below. 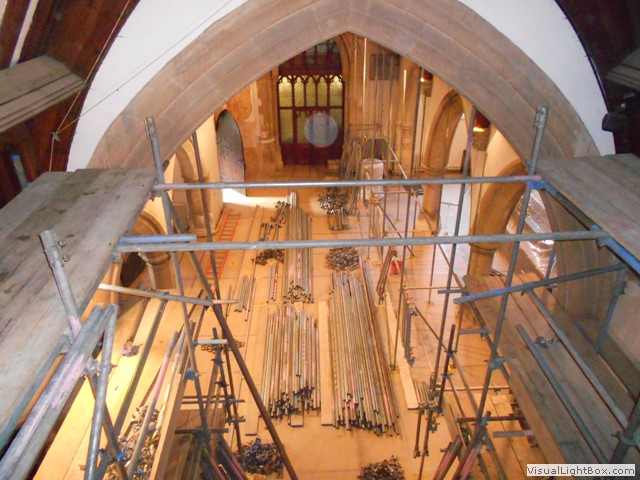 In the chancel, the floor was re-tiled and the choir stalls were repositioned to make them less cramped.  During removal of the old tiles, two memorial stones were discovered, which had been carefully covered over during the 1855 renovation.  One stone, over the Zinzano tomb, was a particularly fine memorial of historic interest, and so this was raised to become a central feature of the new floor.

Click here to listen to a BBC Radio Berkshire interview with the then Rector, Revd John Rogers, recorded in 2014.

Cleaning the stonework inside the church, and in particular the reredos carvings behind the altar, contributed significantly to the visual impact of the refurbishment.

During the refurbishment, new lighting and sound systems were installed with minimal visibility of wiring.  Subsequent additions to the refurbishment, undertaken by church members with skills in working oak, have been a new sound control box, and a replacement surround for the organ and the adjacent door from chancel to vestry.  There is also a new list of past rectors, replacing the previous board which had suffered water damage. 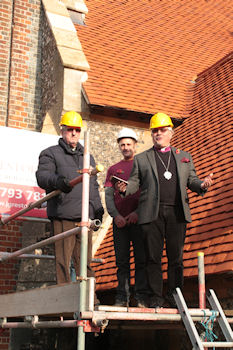 The Renewal of the Roof

Having refurbished the inside of the church, it became apparent that the church roof was in less good condition than had been thought.  It was therefore necessary to undertake another phase of work - Phase 4 in 2014.  The roof was re-tiled, with a waterproof membrane installed beneath the tiles.  The new roof was blessed by the Bishop of Reading.