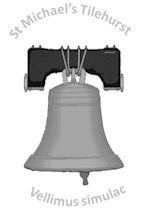 The bell tower was built in the early 1730s.  The spire was added around 1855 when the rest of the church was re-built to G. E. Street's design.

Originally there were six bells in the tower, rung from the ground floor.  These were cast in the year 1723 by Henry Bagley III, at a location in Reading believed to be the site of a mediaeval foundry.  That foundry no longer exists but is thought to have been owned at some time by Joseph Carter, the last of the famous Wokingham founders dating from the 14th century.

In 1885 the bells were rehung in a new oak frame.  At the same time, two trebles were added to complete the octave.  The two new bells were cast by Mears & Stainbank of London, and were dedicated to the memory of Du Pre Alexandra.

Ringing continued from the ground floor until 1906 when the present floor and screen were erected.

In 1937 the bell frame was re-mounted on girders replacing decayed timbers, and the eight bells were quarter-turned through 90 degrees and rehung with ball bearings.

In 1970, the treble and 5th bells were recast by the Whitechapel foundry, and the other bells were tuned.  The bells were rehung in the oak frame of 1885 with mainly new fittings (cast iron headstocks, fixed steel gudgeons, self-aligning ball bearings, and traditional English wheels, stays and sliders).  In 1978, the 7th bell was found to be unsafe and was recast by Whitechapel.

Each Sunday, before ringing commences, the Captain asks one of the ringers to read the ringing office prayer.  This is a tradition across the whole ringing world and, whilst the prayer may change from time to time, the ritual remains the same.  The standard prayer and responses are as follows: 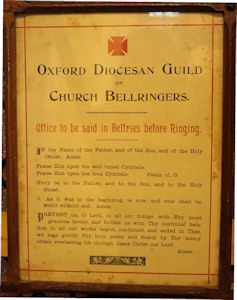 In the name of the Father and the Son and of the Holy Ghost. Amen.
Praise Him on the well tuned Cymbals.
Praise Him upon the loud Cymbals.
Glory be to the Father, and to the Son, and to the Holy Ghost.
As it was in the beginning is now, and ever shall be, world without end. Amen.
Guide us O Lord in all our doings with Thy most gracious favour, and further us with Thy continual help, that in all our works begun, continued and ended in Thee, we may glorify thy name, and finally by Thy mercy obtain everlasting life through Jesus Christ our Lord.
Amen.

Click here to listen to the local Tilehurst bellringers ringing Stedman Triples at St Michael's church.  This was recorded in September 1997. 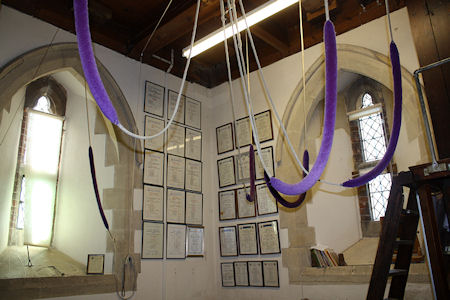 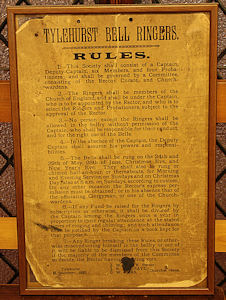 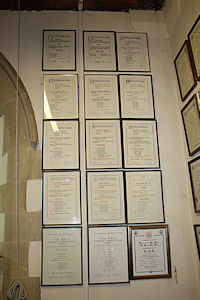 The old ringing rules, and some certificates achieved by the ringers.

If you would like to know more about bell ringing at St Michael's or want to learn how to ring Church bells, please get in touch with the Tower Captain, either directly or via the Parish Office (see the Contact Us web-page).